What with one thing and another, I was more than ready for my seasonal slump by the time the Solstice came along. I was ill twice within three weeks, I spent hours travelling as described in the previous post on this blog, I completed and published my NaNoWriMo novel, one of my teeth became loose and fell out, and in general my energy had drained to such a low point that I couldn’t bring myself to replace the ink cartridge in the printer even once I had acquired the new one and placed it strategically on top of the device all ready to install. In my defence I must add that acquiring the new one turned out to be more problematic than expected, thanks to the Royal Mail’s so-called next day delivery service. 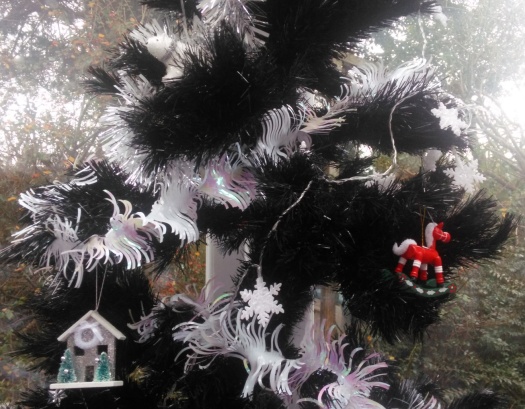 But eventually I recovered about enough to finish buying presents, along with a ridiculous amount of food, and to post all my cards, before starting on the thankless task of creating a Christmas atmosphere in the conservatory, an operation which caused some furniture to be moved around, and that in turn seemed to disturb a creature of some kind, which kept the cat amused for several nights as he pursued it round the ground floor of the house, miaowing at random intervals to alert us to the threat. Goodness knows what it was. He doesn’t usually chase anything smaller than a magpie, but I very much doubt if it was anything on that scale.

It almost looked as if I might be able to relax by Christmas Day, except for the task of cooking which loomed over me, but an unforeseen incident caused me to wake up in the middle of the night and search online for this link. I can exclusively reveal that the method outlined there worked extremely well, much to the amazement of almost everyone else in the family.

So it’s onwards and upwards now as the days become gradually less gloomy and the pace of shopping less frenetic. I’ve even started my new writing plan of the year in my special writing plan notebook.  This is just the first page of it. I am quite annoyed (well, absolutely furious, to be more exact) that I feel I can’t make plans for a gruelling research trip to France until I find out exactly how much Brexit might interfere with any kind of travel to Europe. As I usually enjoy making plans to travel even more than I love actually doing the travelling, this is particularly frustrating. 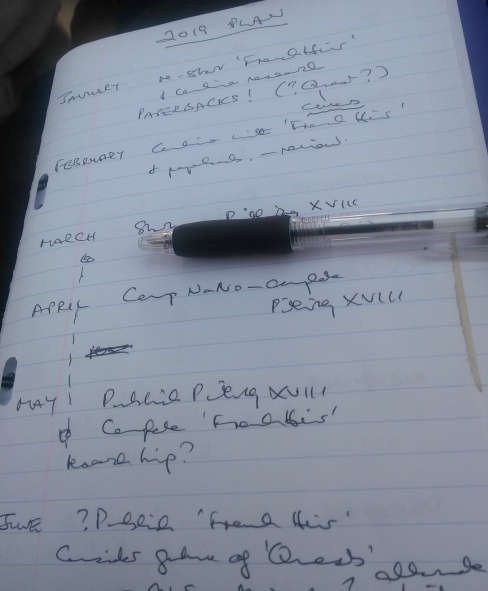 Of course that is nothing compared to the future trials we all have in store, but I won’t even start to go into all that now. After all this is a festive blog post and I don’t want to think about any of it until at least a week on Monday, when I return to work and real life intervenes.

Compliments of the season to anyone reading this!

2 responses to “The Solstice Slump”