I’ve inadvertently found a watertight excuse for not rushing to edit my NaNoWriMo novel, which is that I have another novel on my computer which has been waiting to be edited for quite a few months. And then of course I can use editing my NaNoWriMo novel as an excuse not to do anything with the first novel. I can see this going round in circles for some time, if I’m not careful. At the moment I am half-heartedly working on both of them at once, with the emphasis on the half-hearted part. And of course editing either or both of them gives me a watertight excuse for not working on my Christmas cards. This is how far I have got with them. As if I were some frail, fainting Victorian dowager, the effort of buying the cards and finding the writing-paper has quite worn me out. Writing anything in them would be a step too far, and don’t even mention finding my address book and writing addresses on the envelopes. 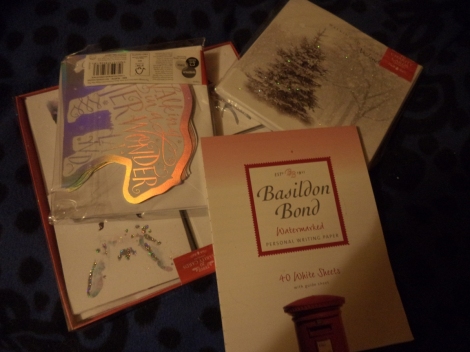 As if I hadn’t already manufactured enough excuses of my own, Fate has intervened to make sure I have another one imposed on me from outside. This is the funding application on behalf of a local organisation, for which I have inadvertently become the editor and guardian of the master document. As often happens with those things, there is a certain amount of urgency involved, although we haven’t yet got to the stage where we have to stay up all night to finish it before hand-delivering it ten minutes before the deadline. That won’t happen until about February or March.

Unusually, I am not too worried about shopping for presents, having discovered one day last week that I can get something for almost everyone at Marks and Spencer, and not only that but I don’t even need to trudge round the shop but can order online and pick up the whole lot later. They are definitely not paying me to say any of this, but I’ve also discovered it’s not the expensive option I might have imagined it to be.

And finally there’s the Christmas knitting, which as often happens I have left to the last minute, but I do have an example from a previous year left over with which to illustrate this pre-festive post. 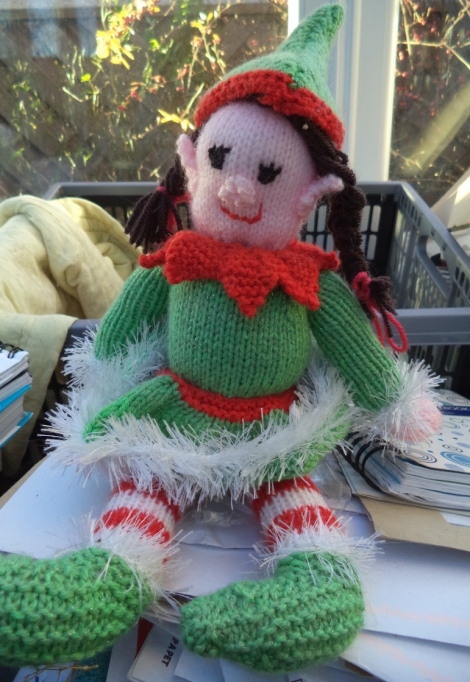