There are several reasons why I haven’t been writing as many blog posts as usual just lately. April was a tricky month, and the beginning of May brought disruption to what I like to call my routine when I went to Oxford with colleagues for a conference. I enjoyed the conference itself, but undoubtedly the best part was being able to stand next to a T-rex in the museum. 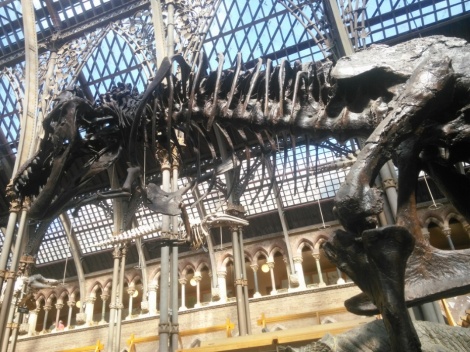 (actually only the cast of a skeleton of a T-rex, but close enough)

Of course, all these other interruptions to my routine are insignificant compared to the fact that I’ve been working on a first draft since the beginning of April, and, as is only too evident from the state of my house, I can’t really do anything much else while this is going on. I am hoping it will be finished by tomorrow, not because I am itching to get my hands on the vacuum cleaner and (even less likely) the garden shears, but because at this point in every novel it’s a case of galloping towards the end. Maybe it’s just me, but by now I don’t really care what happens as long as the story gets wrapped up somehow. There’s a lot to be said for the tyranny of NaNoWriMo in November, when I feel a compulsion to write ‘The End’ by the 30th of the month.

There are other things competing for my attention, but none are as pressing as the novel draft. Work, of course, and I am pleased to report that I’ve regained some of my drive to get things done there after imagining it was gone for good; the local committee I’m on, which is the kind of activity you have to try and keep within boundaries; the above-mentioned domestic tasks, which I have no trouble keeping to a minimum, or even below that at times.

Somewhere at the back of my mind I’ve also been mulling over the writing plan for the rest of the year, always a rough draft at the best of times.  Unusually, I have three projects lined up and competing for attention. More usually, I won’t make up my mind which to work on next until I’ve finished the current one. Watch this space!