This week has comprehensively illustrated the dilemma I faced beforehand about whether to go away on holiday or to stay at home. My main reason for not going away was that one of our cats is on daily medication and has been getting more and more fussy about taking the pills. Actually it’s a miracle he takes them at all. Many cats I’ve had in the past developed the skill of hiding the pill in a special place in the side of their mouths until I thought they’d eaten it, and then spitting it out somewhere, slimy and disgusting, once I gave up watching. As it happened, we had no trouble with that particular cat, but instead we spent an anxious day during the week waiting for test results from the vet – which turned out to be almost completely normal – for one of the others.

Although I haven’t done some of the urgent things I intended to do during this week, there have been things to celebrate. I reached over 45,000 words in my current mystery novel (‘Pitkirtly VIII’, ‘Night of the Living Elves’ etc). This means the end of the first draft should be in sight before long. I went to Pitlochry for the day to see ‘The Admirable Crichton’ at the theatre. There’s a short account of the journey and the stations involved on my ‘Trains’ blog (link on right). It’s always lovely to visit Pitlochry, and even a day trip had me looking up property for sale online afterwards.

Of course, if the vote goes the wrong way on the 18th of September I will not be looking up property in Pitlochry or anywhere else in Scotland, but on the Isle of Wight, in the South of France or Stockholm or any of the other non-Scottish places I’ve liked the look of. With that in mind I’ve arranged for some free days on Amazon for my near-future dystopian sci-fi novel ‘The Mountain and the Flood’ – I think today and Monday are the first two free days and then there are more next weekend, allowing time for people to read this cautionary tale before the referendum. 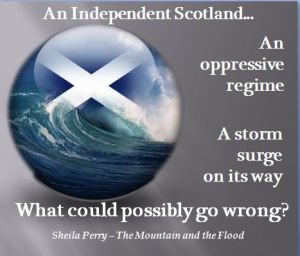